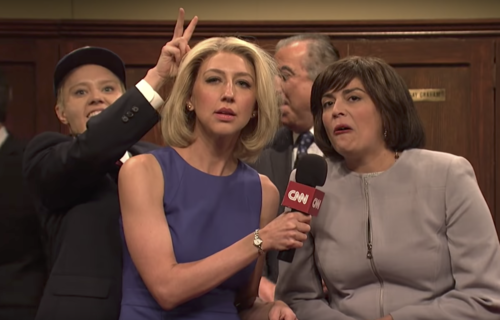 Saturday Night Live has been a cultural reference point since its debut in 1975, more than 40 years ago. It has withstood the test of time because its ever-shifting cast has managed to captivate the audience with dead-on impersonations and satirical takes on the news of the day.

I started watching SNL when I was in elementary school (please don’t do the math because you’ll probably consider me culturally irrelevant). While I didn’t always understand the irreverent brilliance of the iconic original cast, I bore witness to some of the most noteworthy moments in the early days of improvisational television.

My friends and I used to chant “Jane, you ignorant slut” without ever really understanding the underlying humor. Over the years, as the casts evolved and I matured, my appreciation for the satire increased. SNL experienced many high and low periods during its long run but there is likely no argument that the past several years have given new life to the show, providing us with a much-needed comical respite from the intense political goings-on in our country.

Last week, during the premiere of Season 44—I warned you not do to the math!—I found myself watching from a different perspective and pondering the question of what connects us so forcibly with the satirical characterizations. When Matt Damon burst through the door playing Brett Kavanaugh, I—like millions of others—was captivated. Between the excitement of having a special guest for the Cold Open and wondering how he was going to embody this personality that had been plastered all over the news for weeks, I was enthralled. As viewers, we formed our impressions of Kavanaugh based on the clips we watched on our news outlet of choice, and now it was up to Matt to find the connective tissue to provide a sardonic depiction that would make us laugh during an emotionally-charged moment in time.

“What makes satire like SNL so effective and impactful is the actors’ ability to tap into the nonverbal cues that we are all subconsciously tuned into.”

Like Damon, dozens of other Hollywood stars have dipped their toe in the water of impersonation on SNL. Tina Fey managed to imitate Sarah Palin so strikingly that people often starting confusing the actress with the real candidate. Alec Baldwin had a legitimate renaissance based on his characterization of Drumpf both before and following the 2016 election. And improv guru Melissa McCarthy crushed it week after week as former White House Press Secretary Sean Spicer. I mean, really—that Segway-styled Podium was everything! Watching her roll around the set or venture out to NYC streets was both spectacular and brilliant. But what, exactly, is it about their portrayals that lures us in and connects the neurons in our brains to associate the satirical representation with the actual figure?

What happens when we watch these characters imitated is similar to what we experience with anyone we interact with. We are acutely aware of mannerisms, gestures, vocal inflections and facial expressions. The actors deftly capture those nonverbal elements and exaggerate them just enough to seem outrageous.

Matt Damon, for example, zeroed in on the exact characteristics that were burned into our minds when we saw Kavanaugh during the notorious Senate hearings just days earlier. When he twisted up his face and spit out his water, he exploited the more subtle appearance and activated our memories from during the testimony. And we laughed because it was an outrageously exaggerated parody yet still a close enough representation of the original impression we had.

Wigs and makeup help to visually stimulate what we have ingrained in our minds and the actors build on that. They magnify the subtle (or, sometimes not-so-subtle) traits that we closely associate with the characters. When Baldwin lurked behind Kate McKinnon’s Hillary Clinton during SNL’s interpretation of the Town Hall Presidential Debate, it activated our recollection of the awkward moments we watched during the actual debate.

Ultimately, what makes satire like SNL so effective and impactful is the actors’ ability to tap into the nonverbal cues that we are all subconsciously tuned into. They inherently know how to amplify those cues making their characters believably accurate. They, like us, saw and heard the same cues and they masterfully overemphasize them to ignite our laughter.

The crux of SNL’s satire is that it’s not only about what they’re saying, but how they’re saying it. Now go ahead, watch those clips with the sound off and you’ll probably laugh just as hard.